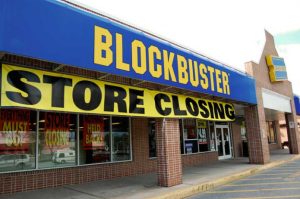 Have you ever thought about that? If someone would be able to meet the public’s demands for movies, you’d think it would be the company who was in business for years. So why didn’t Blockbuster create Netflix?

There’s a lot of reasons but one of them is that they thought they were a video company. They thought what they dealt in was physical video cassettes, DVDs and video games. They were wrong.

They were an entertainment company.

And as new ways to deliver that content were developed, they should have led the way in using them.

Because sometimes success makes you deaf.

Every dollar you’ve earned makes you think you don’t have to change.

Every round of applause you’ve enjoyed makes it harder to innovate.

Every win tries to whisper to you that you’re the best!

This is why companies you have worked for have said the phrase, “That’s the way we’ve always done it.”

There’s nothing wrong with tradition or success. They are both awesome when dealt with correctly. But unchecked, both will trick you into thinking you’re better than you really are.

And so you forget that someone you’ve never heard of, with a name that isn’t even real, using a medium you have the same access to, is about to eat your lunch.

This entry was posted in Getting Results, Leadership, Personal Development.