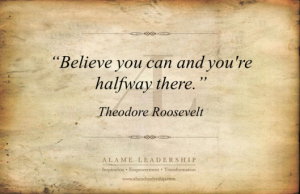 I believe in the power of belief. It’s a perspective that can dramatically impact the quality of your life. I’m not just talking about belief as it relates to religion, although that’s extremely significant too. What I’m talking about here is a mindset.

As Henry Ford said, “Think you Can or think you Can’t, either way… you’re right”.

Belief is a choice.

It’s like two stories, one about a hero and one about a victim. You get to choose your role. The story you tell about yourself is a result of your beliefs and it will determine how your overall story unfolds.

It’s about a belief in yourself, in developing a level of confidence and an inner voice that says, “you CAN do it” and “you CAN be a success despite the challenges behind you or ahead of you.” Your past does not necessarily determine your future (unless you let it). If you’ve failed before, rise up and use it to help you overcome today. Don’t let fear immobilize you. Believe in yourself and who you were made to be.

It’s also about a belief in an outcome, seeing what COULD be and believing that it’s possible to achieve it. Not just saying you believe it’s possible, but really believing it! You can’t fake it here. If you want to create something great, you fist have to see it (in your own mind) and believe in it before it will ever be. Don’t let the first sign of a pot hole in the road throw you off course either, find a detour and continue on to your desired destination. Don’t give up. Don’t lose focus. If it’s worth believing in, it’s worth pursuing.

In any case it’s about vision and confidently stepping forward to turn that vision into a reality. It could be a vision of becoming a better parent, a better boss, going for that job you want or it could be creating a product, a nonprofit initiative or simply accomplishing a goal you’ve always wanted to pursue.

It doesn’t mean you’ll succeed every time, it just means that your belief in your God-given purpose and abilities becomes greater than your doubt.

Is it time for a belief check?

Be encouraged today to know that you can. You have gifts and abilities to share and you were given them for a purpose. Use them to fulfill your potential. Choose to step forward, despite your doubt, and believe in what can be

This entry was posted in Family, Getting Results, Leadership, Personal Development.