What Happens To Others When You Speak 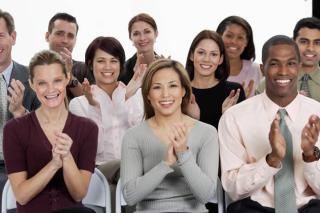 If you find yourself speaking to small or large groups of people – even once in a while – you will want to read this.
If you train, teach, speak or deliver reports to a group of people, these six helpful revelations about what goes on inside the mind of every audience member will help you best at your best.
And each are backed up by scientific research.
Speaking Coach Bryan Kelly shares these six “secrets” from years of interviews and research.
Here are the six secrets:
1.         We follow leaders. When you’re the presenter, you’re given authority. The audience wants and expects you to lead them. What you do next is vital so you don’t lose their allegiance. Become a leader from the start and own it. Stanley Milgram’s controversial experiments in the early 1960s showed it’s very hard for most of us to resist authority. We’re simply wired to follow leaders.
2.         We instantly read people. Audience members size you up before you even speak, which makes it essential to carefully design your opening. A well-crafted introduction and confident body language inspire people to follow your lead throughout the presentation. The past 15 years of psychological study shows people make unconscious decisions about others in one second or less. Malcolm Gladwell explores this research in his book Blink: The Power of Thinking Without Thinking.
3.         We assign meaning to body movement. Knowing how to stand, move, gesture, and deal with nervousness conveys leadership, passion, and openness. Stand straight, head upright, breathe deeply, and record yourself on camera when rehearsing. Intentional practice leads to confidence. A 2009 study conducted by Pablo Brinol revealed that by simply taking a posture of confidence, people feel more confident. In her 2011 book, The Silent Language of Leaders, Carol Kinsey Goman explains how physical gestures help us be effective leaders.
4.         We pay attention to vocal tone. The way you say a phrase means as much or more as the words themselves. Great speakers have long utilized this secret to engage audiences through volume, modulation, articulation, and well-placed pauses. MIT professor Alex Pentland summarized his study of nonverbal communication in his 2008 book, Honest Signalsand helped create a device called the Sociometer that monitors and predicts a person’s communication effectiveness.
5.         We imitate emotions. Two highly contagious emotions are passion and nervousness. Think hard about what you’d like people to feel, then exhibit that emotion. Those feelings will be conveyed through your voice and body language. Mirror neurons in our brain allow us to literally experience what others experience. It’s believed these neurons help us empathize with someone. Neuroscientist V.S. Ramachandran’s 2012 book, The Tell-Tale Brain, details the significance of these neurons and how they work.
6.         We sync brain patterns when listening. Our audience is more strongly affected by listening than by reading slides. Visuals should support what you’re saying, not interfere. Better to have people intently listening than distracted by bullet points and complex charts. A 2010 study by Greg Stephens put participants in an fMRI machine while listening to someone talking. The brain patterns of the listener began to sync with the speaker’s brain patterns. The longer this occurred, the deeper the comprehension.

Mastering these six secrets gives you the ability to effectively connect with any group of people when sharing your expertise.

This entry was posted in Family, Getting Results, Leadership, Personal Development, Teams.